Did the Bush tax cuts increase or reduce revenue?

During my segment on the Morning in America show with Steve Hayward today, I tossed out the idea that—contrary to Laffer Curve expectations—the Bush tax cuts didn't actually increase revenue to government. That apparently resulted in some controversy after I left the air, with callers saying that I'm dead wrong on the topic.

The easiest response here is to note that before the Bush tax cuts were enacted in 2001 and 2003, the federal government had a surplus of money to fund its operations and pay down the country's debt. After the tax cuts were enacted, we started borrowing money on a full-time basis.

That's not proof on its own, of course, because we tacked on some new spending obligations during the Bush Era—most notably the wars in Iraq and Afghanistan, increased national security spending aside from those wars, and the expansion of Medicare benefits to cover prescription drugs.

So, hey, let's look at the revenues: 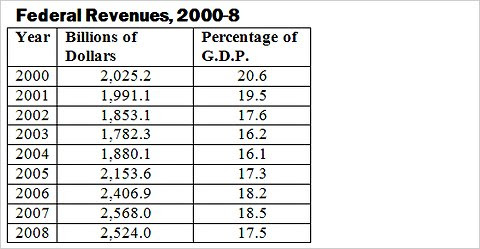 Bruce Bartlett writes: "According to a recent C.B.O. report, (The Bush tax cuts) reduced revenue by at least $2.9 trillion below what it otherwise would have been between 2001 and 2011. Slower-than-expected growth reduced revenue by another $3.5 trillion.

"Spending was $5.6 trillion higher than the C.B.O. anticipated for a total fiscal turnaround of $12 trillion. That is how a $6 trillion projected surplus turned into a cumulative deficit of $6 trillion."

But don't just take the CBO's word for it. Greg Mankiw, a Harvard economics professor, once called advocates of the lower taxes/higher revenue theory "charlatans and cranks": "I used the phrase 'charlatans and cranks' in the first edition of my principles textbook to describe some of the economic advisers to Ronald Reagan, who told him that broad-based income tax cuts would have such large supply-side effects that the tax cuts would raise tax revenue. I did not find such a claim credible, based on the available evidence. I never have, and I still don't."

Mankiw, of course, was one of George W. Bush's top economic advisers from 2003 to 2005. He wrote the paragraph above in 2007. And he was an advocate of the tax cuts—not because they raised revenues (he didn't believe they did) but because he believed they helped spur demand in the face of a challenging economy at the time. So: Not even Bush's own economic advisers who favored tax cuts believed they raised revenues. If that's the case, why should the rest of us?

On a related note: after I left the air Steve apparently chastised me a bit for not providing a top tax rate that's appropriate in a market economy like ours. Fair enough, I guess, but I think it's something of a mug's game to pick a number and stick to it. Different tax rates will be appropriate at different times, depending on the economy, the needs of government—being at war, for example, is more expensive than not being at war—and so forth. I'm not interested in confiscatory levels of taxation—unlike some liberals, I don't hearken back to the Eisenhower-era 90-percent marginal rate on top earners—but I also think we're a long way from there. Perhaps the answer "it depends" isn't rigorous enough, but it also has the advantage of being true.
- October 26, 2011

Email ThisBlogThis!Share to TwitterShare to FacebookShare to Pinterest
Labels: taxes