Hamid, at The Atlantic:


The United States has done terrible things in the Middle East. To even casual observers of the region, this should be clear enough. That, however, doesn’t mean there is a moral equivalence between Iran and the United States. Elevating America as a somehow unique source of evil takes necessary self-criticism and turns it into narcissism. It insists on making us the exceptional ones, glorifying ourselves by glorifying our sins. To suggest that American officials are at the rarefied level of the deliberate, systematic mass murder and sectarian cleansing that Soleimani helped orchestrate isn’t just wrong; it’s silly.

American criticism of the Soleimani assassination generally hasn't suggested that America's bad guys are as bad as Iran's bad guys. (I'm not sure how to do that moral balancing, anyway, but that's not what the criticism has been.) Instead, the criticism has been that Trump's decision didn't make Americans safer, and that it might have been a dangerous and unnecessary escalation of the low-level conflict that could lead to a shooting war the United States seems ill-equipped to win.

That's a different critique. But it's the one most critics of the president are making. Hamid's piece doesn't really make sense.
- January 09, 2020 No comments: Links to this post

Fixing 'The Rise of Skywalker': A slightly better story 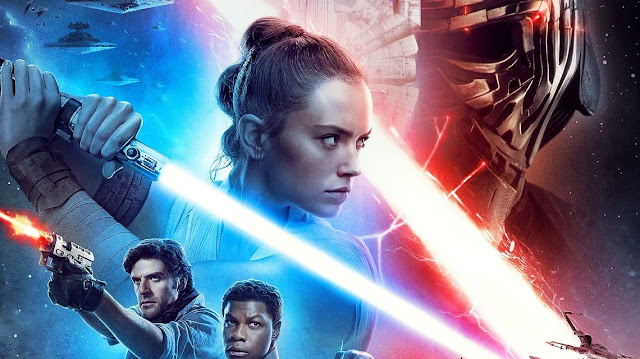 I saw The Rise of Skywalker last night. Didn't like it. But I can fix it.

The film opens at Leia's funeral. Rey is at the foot of Leia's deathbed, grieving, when Kylo makes a force connection with her. We know from TLJ he was hesitant to kill his own mother. Now he is overcome with grief -- a grief that will push him further to the dark side.

He tells Rey of an old Sith legend -- about Darth Plagueis the Wise, who uncovered the secret to eternal life. He can still save his mother. He will find the final resting spot of Emperor Palpatine, aka Darth Sidious, and extract the secret there.

Rey realizes that Ren in possession of such power would amount to a final victory for the Dark Side, and final defeat for the Resistance. So she, Poe and Finn race Ren to Endor. Finn discovers the draft-dodging ex-Storm Troopers. Rey and Ren meet on the Death Star ruins and battle - it appears Rey will win, but Ren escapes with Palpatine's Sith books (like the Jedi books Rey has) to go to Exegol.

Rey tracks Ren, thanks to their force connection. Lando and Chewie summon allies. The First Order and Resistance make their final meeting over the planet. Ren, meanwhile, uses the Sith books to summon Sidious back to life as an experiment before raising Leia - but Sidious proves even more mad and more evil than we remember, debilitating Ren with a bolt of lightning just as Rey arrives. Palpatine turns his attention to Rey, preparing to kill her, when Ren summons his last reserves and together with Rey they use their force powers to kill the Emperor at last and for real. Ben succumbs to his wounds.

Up above the planet, the Resistance and their allies win.

The movie ends with Rey's pilgrimage to Tatooine. As she visits Luke's home, she looks up and see the Force Ghosts of Leia, Luke, Han, Annakin and Ben -- a happy, united family at last.

This solves several problems with TROS:
• Shoehorning Carrie Fisher footage into the movie.
• Too much plot.
• Retconning Rey's parentage.
• It brings back Palpatine in a way that makes sense instead of as a seeming afterthought to fix plot holes.


• There's a reason there was a song called "Bette Davis Eyes."

• They don't really make movies like this any more, that end with the beautiful, aesthetically perfect death of the protagonist. Maybe on cable TV now and again? (Makes sense: "Dark Victory" was remade as a TV movie in 1976, starring Anthony Hopkins and Elizabeth Montgomery from "Bewitched.") Maybe Martin Scorsese was onto something.

• There's a reason there wasn't a song called "Ronald Reagan is a skilled actor of remarkable nuance."
- December 06, 2019 No comments: Links to this post

Things that trouble me: Loving your enemies

Just saw this posted by a prominent African American attorney in Philadelphia: 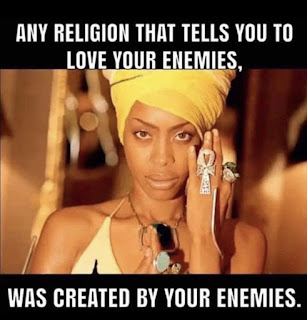 And I get it. There's a history in this country of "Christians" using their religion to subdue black people. I'm reminded of this:


On display now at the Museum of the Bible in Washington, D.C., is a special exhibit centered on a rare Bible from the 1800s that was used by British missionaries to convert and educate slaves.

What's notable about this Bible is not just its rarity, but its content, or rather the lack of content. It excludes any portion of text that might inspire rebellion or liberation.

A religion that contorts itself to maintain the mastery of its adherents is bad religion. It is propaganda parading around in the garments of faith. But I'm going to resist the temptation to say the people who do such things aren't "real Christians," because let's face it: Christianity is whatever its adherents actually do.

On the other hand: Loving your enemies is really fucking hard to do. Almost nobody is inclined to try, and very few make the attempt.

And I'm convinced that the proportion of people claiming to be Christian who really endeavor to love their enemies is exceedingly small.

I'm maybe not the person to lecture on this. My own faith is ... shaky. I can best be described as agnostic-with-one-foot-still-in-the-faith. But I believe Christianity's ideal is a challenge for adherents, not because of its sexual ethic, but because it requires us to love the most unlovable of people, in the most unlovable of situations.

That is an extraordinary demand. That so few of us follow it make the meme above seem pretty reasonable. But I hate that it is so. 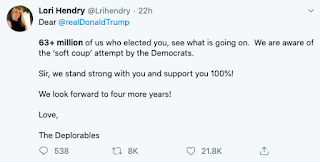 Of course, Donald Trump's opponent, Hillary Clinton, received nearly 66 million votes. That's ... more. But she lost the Electoral College, which places more emphasis on where voters cast their ballots than the number of votes a candidate receives, and Donald Trump won the presidency.

Ever since, Republicans have argued for the rightness of the Electoral College by arguing the founders had antimajoritarian designs on protecting the people's rights, and it's a lousy argument -- one I guarantee they wouldn't be making if they'd lost two elections in 20 years despite winning the popular vote (just as most Democrats would also be on the other side of the issue) -- but fine.

That's what makes the "63 million voters" argument against impeachment so interesting. It relies on a particular kind of democratic legitimacy that Donald Trump hasn't earned. If we're so concerned about overturning the will of 63 million voters, we surely ought to be concerned with overturning the will of 66 million voters -- which is what the Electoral College does. If you take the GOP argument seriously, Trump would have a stronger argument against impeachment if he'd won the popular vote. He didn't and he doesn't.

The Criterion Channel on November 1 unveiled a collection nearly two dozen classic MGM musicals for streaming this month. One blogger's mission: To watch each and every one.

A number of musicals from the early 1950s are about the pre-war generation of entertainers finding their way in a new era. White Christmas is most explicit about this, with its "Choreography" dance number, as well as the overall story of two buddies who find a way to pay tribute to their washed-up former commanding officer. Singin' In the Rain, which tells the tall of the conversion from talkies to sound, is somewhat more oblique about it, but the themes and sense of disconnect and discovery are still there. The Band Wagon, about Fred Astaire being a washed-up movie star, then finding new vigor by taking over a failing "modern" show, is more of the same. But at least we get this expression of cinematic joy:

Email ThisBlogThis!Share to TwitterShare to FacebookShare to Pinterest
Labels: month of musicals

The Criterion Channel on November 1 unveiled a collection nearly two dozen classic MGM musicals for streaming this month. One blogger's mission: To watch each and every one.

Pure joy. In this series of posts, I've often become hung up on how musicals of yesteryear often fall short of modern standards of morality and ethics. No need to with this movie, which largely dispenses with story in favor of just being entertaining. Lots of early musicals nod back to the vaudeville days; Broadway Melody of 1940 pretty much is vaudeville. Otherwise, how are you going to get a scene like this?


That's some crazy shit. There's still plenty of music going on. Cole Porter was in charge of the music and lyrics in this movie. I realize, coming to this Broadway Melody, that I know precious little of Eleanor Powell, and that's an oversight I now want to fix. She's amazing. Check this out.

Hamid , at The Atlantic: The United States has done terrible things in the Middle East. To even casual observers of the region, this shoul...